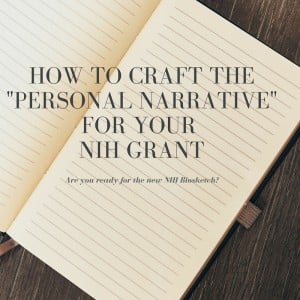 On a recent webinar about State of Grants in 2012, I mentioned that the personal statement part of the NIH biosketch is a great opportunity to additionally “market” your project. In my experience, most people waste this opportunity by listing a very bland and generic statement.

The most common (ineffective) approach I’ve seen seems to be to just recapitulate the publications and achievements in a narrative format. But that’s not adding any new information, it’s just repeating what’s already in the biosketch.

Instead, you want to tell a story of how your own background intersects with the project at hand. Your narrative should cover key points such as:

– What is the big problem you’re trying to solve (long-term) and why? An example might be that you are interested in developing new diagnostics for cancer because someone you know was affected by it.

– How does your training put you into a great position to do the research at hand, specifically?

– What other strengths do you bring to the project that wouldn’t otherwise be apparent from your lists of positions and qualifications?

As with all good stories, it should begin with the “villain” (problem) that got you into this research, the central challenge of the research, how you came to be in a position to do the research, and the hoped-for outcome.

Some people have asked whether they should list reasons for extended absences or productivity lapses (e.g. maternity leave) or other challenges they’ve faced.

I generally suggest “no” on that. Regardless of whether the reason for the absence is legitimate (I DO think we should be understanding of those who want to raise a family), when it comes to competing for scarce resources, I believe some reviewers will see this as a “weakness” and almost none will see it as a strength. So, on balance the effect is neutral at best, and negative at worst.

The one exception is when the absence or lapse contributes in a clearly positive way to your present ability to do the research being proposed. For example, let’s say you did a sabbatical where you learned a whole new skill set that is relevant to the proposal at hand, but during that time you didn’t get any publications (because you were learning or experiments didn’t work out). I’d still recommend mentioning the absence, but only from the perspective of the strengths that it helps you bring to the table.

While the personal statement may not make a huge difference in your grant’s fundability, it could make the some difference if you’re close to the funding line and need just that extra bit to push you over into the black (that means funded) range.

******
If you write NIH grants, check out some of my other blog posts on the Significance section, the Short Format, and Giving a Good Talk.

Morgan Giddings
« Previous Post The new NIH R01 grant format Next Post » Science for the sake of it, or science for dollars (euros)?

Get Your Reviewer “hooked” on your Specific Aims page

Get Your Reviewer “hooked” on your Specific Aims page

How to write your NIH Approach Section, without overloading yourself or your reviewer

How to write your NIH Approach Section, without overloading yourself or your reviewer

How Too Much Objectivity Kills Your Grant Chances

How Too Much Objectivity Kills Your Grant Chances