As we climb up the science career ladder, time pressures become ever more acute, leading to a sense of frustration at all that remains undone, at ever growing stacks of papers, and at ever piling up emails.

I’m acutely familiar with this from the juggling act that is my life – having built a large lab and two businesses while finding some time to spend with my family, without good time management my ship would have already sunk.

There are tons of time management systems out there, but a few that I’ve found that have really helped manage an insanely busy life.

A few years ago, I started using David Allen’s Getting Things Done (GTD), with the software tool Omnifocus. The idea behind this system is collecting and processing all tasks through an Inbox, then sorting things into projects with a focus on the “next action.” When it comes time to actually do stuff, you then sort things by “context” (e.g. phone, office, car, errands, kids) so that you can accomplish like tasks altogether.

I “got a lot done” with GTD. But I found two problems:

1) The system gives little guidance on prioritization. I got a lot of small/urgent tasks done, and the big, not so urgent, but most important tasks kept getting delayed. That’s because my list was 100’s of items long. So anytime I looked at it, there was always something there that I “should” be working on. I found it pretty hard to ignore those many “should be doing” items in order to focus on the “really important” but less urgent things, like writing several books, getting manuscripts out the door, and so on. Hence, those big things sat undone, until they too grew urgent (like grant applications).

2) It took a lot of time to process and review the ever growing list of tasks and projects I’d developed. Over time, I became more ruthless about trying to exclude the unimportant – but the lists were still very big and time consuming.

After a few years of this, I discovered Simpleology by Mark Joyner. The crux of Simpleology is placing your “big picture” goals into the system, making a clear plan on how you will achieve those big picture goals, and then by using the web-based “desktop cockpit,” being reminded each and every day about what your big picture goals are. The system asks you to take at least one concrete action every day moving towards those goals. 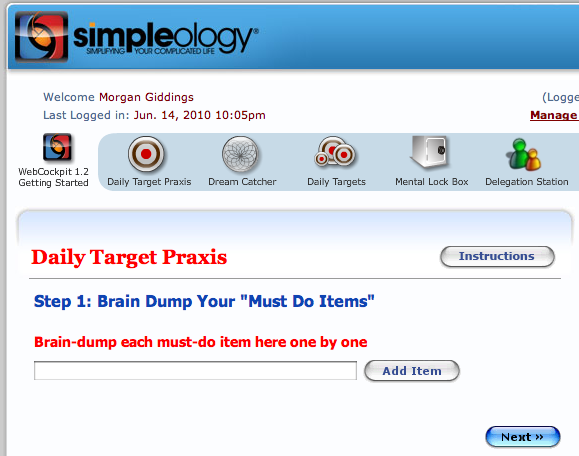 Initially, I found this to be a “miracle cure” for the problems that had plagued me with GTD. Every day I would enter something into my list – like working on my book manuscript – that moved me towards that big picture. I was no longer permanently lost in the trees, and I could occasionally see the forest.

But then I encountered a few problems with Simpleology:

1) The reality is that there are many small things I do need to remember and attend to – but only after I work on those big things. I tried managing all the “small stuff” intermingled with the “big stuff”, and my Simpleology daily list started becoming very long. Then when I sat down to start working on it, I’d quickly reach overwhelm – only completing half the tasks on my list each day (or less), and having a large list to carry over and deal with the next day. Soon, I was so overwhelmed by the list of small things to do, that I didn’t feel that I could commit the time to the big things. Back to square one.

2) Simpleology does not run well on the iPad because part of it is Flash based, and I use the iPad for managing my life. So then I had Omnifocus on the iPad keeping track of one list, and Simpleology with another list, and I’d try to manually keep the two lists in Sync. This failed quickly.

Since then, I’ve made two big steps forward in realizing how to deal with these issues of balancing the “big but not urgent” vs the “small but urgent.” First, Steven Covey’s book “7 Habits of Highly Effective People” reminded me about the vitality of staying focused on the “Important” things to go where we want in life, rather than just letting the “urgent” drive us to some random destination. Second, I signed up for a new and more expensive program on Time Management that really drove Covey’s point home in a deeper way. I’ll talk about that program in a future post.

The combination of these things has led to a new and improved approach to time/life/energy management:
1. Spend time in the morning to get in a focused, calm state of mind before working. This includes exercise, a soak in the bath, and eating a low-carb, healthy breakfast.

2. Leave email and phone turned OFF and unchecked. (I have a special private email address that I will sometimes check only for urgent issues).

3. Go through the Simpleology Daily Target Praxis (DTP) to focus on the “big/important” stuff for the day (items that fit with long term goals). I restrict this to 2-4 big items I want to accomplish for the day, such as writing a chapter for my book, editing a manuscript, etc. The Simpleology DTP also reminds me to each day focus on doing one thing to optimize my time/energy/money (alternating).

4. When random thoughts or issues arise that need later attention, I put them in my Omnifocus (GTD) inbox.

5. AFTER I’ve done the major things for the day, I check email and turn on the phone. I put all the assorted stuff that’s incoming into my Omnifocus.

6. I spend 1-2 hours going through the Omnifocus system to figure out what “urgent” tasks I will take on, and I do those. This includes responding to emails, making and returning various phone calls, etc.

7. Once I’m done with #6, I turn off email again. If there’s time, I work on another “big picture” item, or I focus on family time.

8. I do not multitask, except during step 6 (and I try to minimize it then). It is inefficient.

*Be forewarned, when you sign up, you’ll be presented with several offers for other products (that’s how he makes money on a free product), and that rubs some people in the wrong way. It made me suspicious at first – but once I overcame that (which took several months), and dove into the system, I realized that as a free product, there’s incredible value here. Unfortunately, sometimes we humans don’t know what is good for us.

**There are several affiliate links here through which I may earn a small commission if you sign up, to support my further blogging and science career efforts. I prefer supporting the website that way than having huge flashing banner ads all over the place. As always, I only recommend things that I have used personally and that I would recommend to a friend or family member.

Working hard does NOT mean success (at grants or anything else) 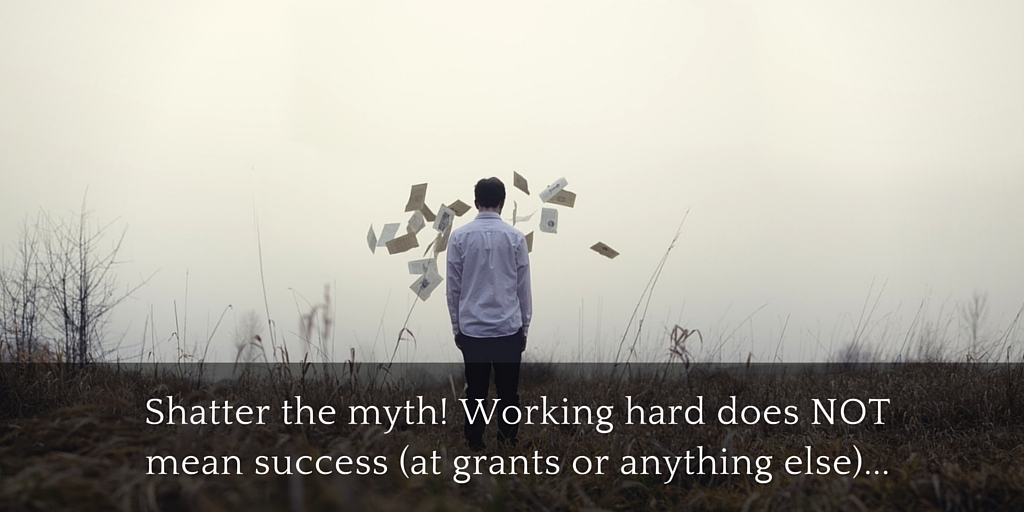 Working hard does NOT mean success (at grants or anything else)

How to be truly productive in your career? Consider the P to PC ratio (Episode VI of Success Series) – MetaMorgan TV

How to be truly productive in your career? Consider the P to PC ratio (Episode VI of Success Series) – MetaMorgan TV

A key factor in a successful science career (or any career), and how to do it – MetaMorgan TV

A key factor in a successful science career (or any career), and how to do it – MetaMorgan TV

2 replies to "The keys to time management: How systems have failed and what I’ve done"