This is a guest post by Robert Finney, PhD.

The new NIH Biographical Sketch format is required for research grants submitted on or after May 25, 2015.  Foremost, the new format represents great potential to enhance investigator credibility – but only for those that understand how to use it to their advantage. In contrast, it can be lethal for those that do not.

The biggest opportunity and highest impact will be on young investigators and established investigators with less-than-stellar publication records.  This may come as a surprise to some, but hear me out…

The Need for Change

The mission of NIH is “to seek fundamental knowledge about the nature and behavior of living systems and the application of that knowledge to enhance health, lengthen life, and reduce illness and disability”.  Although NIH relies on expertise and innovation provided by the research community to fulfill this mission, the agency must demonstrate fulfillment of its mission to Congress – which ultimately controls the NIH budget.  Accordingly, it behooves NIH and indirectly all research laboratories supported by NIH to establish processes and metrics that can optimize return on the NIH investment into the sciences:  i.e. to select laboratories and researchers with the highest potential for impacting the mission of NIH.  The short-form grant application format adapted several years ago and now the new NIH Biographical Sketch format are designed to do just that.

The impetus for the new format was initially in response to scientists that felt the former Biographical Sketch format did not allow applicants to “fully describe the nature, significance or impact of their scientific accomplishments and capabilities” and “disproportionately advantages those with extensive publication records and unduly weighs publications that have appeared in highly prestigious journals.”  For example, many felt that metrics for scientific productivity have changed over the years and should now extend to other types of output, such as patents, licenses, videos, enabling software development, various forms of data sets, and changes to standard medical practices or policies.  By focusing on an investigator’s publication record and ignoring these other metrics, it was felt that many exceptional investigators and grant applications with potential for high impact were not being approved – thereby defeating the mission of NIH.  In response, NIH established a Work Group to evaluate the merit of this idea.  Input from the scientific community was solicited and taken into consideration by the Work Group to arrive at the new format .

Highlights of the New Format

The new NIH Biographical Sketch format is required for research grants submitted on or after May 25, 2015.  The new format:

Through this new format, reviewers now have the opportunity to not only evaluate an investigator’s impact on their field through publications, but also through a variety of other relevant metrics.

The new Biographical Sketch format was piloted using five different requests for applications.  A survey of opinions for one of these (RFA-NR-15-001) was analyzed using both applicant and reviewer inputs.

A table of the results of this study is reproduced below.

The analysis revealed strong support from all age groups indicating:

The analysis revealed some concerns:

It is unfortunate that the survey did not ask the truly relevant question:  To what extent did inclusion of Section C – Contributions to Science influence the overall impact score for the grant application? 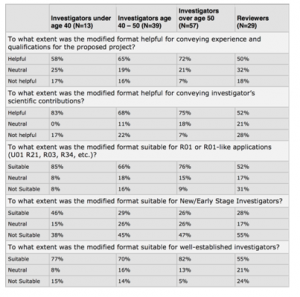 Software Developers, Statisticians, Medical Device Developers, and Others that typically do not publish in Peer Reviewed Journals or are associated with large, but impactful, projects.

It is certainly true that new metrics are needed to evaluate the impact of scientists and their projects in promoting the mission of NIH.  The sheer volume of data produced today requires advances that far exceed the capacity of peer reviewed publications to communicate.  Next Generation Sequencing, Bioinformatics, and Systems Biology are just a few areas that have experienced an explosion in data production, each requiring technological, utility, and statistical expertise to embrace.

Indeed, there is need for new Knowledge Management tools in the sciences to enable easier access and analysis of this information – but that is a subject for another time.  So without a doubt, the new format could benefit those researchers whose contributions extend beyond the scope of peer reviewed journals. Whether or not the new format will actually impact awarding of grants for these researchers will only be revealed with time.  What is certain is that only those that know how to properly frame their Section C Contributions to Science section will capitalize on the opportunity.

Those within the Peer Reviewed Publication Metric:  It could be argued that more grants given to those evaluated for productivity through extended metrics will result in fewer grants for those whose productivity is measured by the traditional publication record metric.  Whether or not there is a significant effect will only be established with time.  What is again certain, however, is that only those that know how to properly frame their Section C Contributions to Science section will be able to further enhance their prospects for funding. Proper framing has great potential to advance applications that might otherwise be overlooked.

Young Investigators: there is ONLY an upside to this!

Here, I strongly disagree with those older than 40 that participated in the survey above and agree with those 40 years of age or younger.  Yes, young investigators can certainly use the new BioSketch format to their advantage.  If one looks carefully at the statistics, what does the young investigator have to lose?  Today’s grant environment is at historical lows (at least the lowest it has been for just shy of a century).   Twelve years ago, researchers had a roughly 1 in 3 chance of attaining funding for their submission to NIH.  That is now about 1 in 6 (~17%).

This almost unbelievable discrepancy is related to not only fewer grants being awarded in total, but also to justifiable preferences given to established laboratories with an easily recognized track record (usually publications).  So how much downside is there to the new investigator?  That is, how much worse can the situation be as compared to conditions with the prior BioSketch format?

At least with the new format, the new investigator can bring attention to other contributions.  Did their work lead to any patents?  Was it part of a large and successful study?  Did it lead to a medical device?  Did it lead to a method or reagent used throughout the research community?  Are there any notable and significant contributions?  Indeed, a savvy new investigator should develop a strategic plan to build their BioSketch as it is essential to advance from the “young investigator” stage of their career to the “established investigator with a track record” stage of their career.  With this in mind, it is extremely critical that ONLY contributions that had an important impact on an important study be included: inclusion of trivial contributions or trivial projects will backfire.  It is also extremely critical that the contributions be well framed – to bring out the relevance and importance of the researcher’s contribution and to clearly communicate this to reviewers.

The situation for established investigators with a modest publication record is similar to that of the new investigator:  the same steps need to be taken to improve the BioSketch.  A strategic plan should be developed with the new BioSketch in mind.  This does not mean that these investigators cannot attain grant awards.  It just means the bar is set higher and it is critically important that the grant application be well framed with an innovative and impactful solution to an important issue.  It can and has been done.   Yet, it is my opinion that the new format with a strategic plan is likely the best means to get investigator’s career back on track.

It is here to stay.

It has always been difficult to fully value the contributions of investigators and even more so in today’s highly complex scientific environment.  Whether or not you like the new format, it is likely here to stay in one form or another.  I think it is fabulous for those that know how to properly frame a grant proposal and it can and will assist NIH to fulfill its mission.  Some complain that it is placing too much burden on applicants.  For those that know how to frame a proposal, this is likely not a massive undertaking and it has potential to greatly advance the proposal.  For those that do not know how to properly frame a grant proposal, the section has potential to undermine the grant:  It should not be taken lightly.

So how does one properly frame the Section C – Contributions to Science?

If you follow the guidelines presented by Morgan Giddings in her book “4 Steps to Funding”, her Grant Dynamo 2.0 online grant writing course, or her intensive Grant Foundry program, the answer is obvious – hence the reason I am posting this on her blog.  The key is to keep each section simple, nontechnical, clearly written, and easily readable – and it must “tell a story.”  It is much as an elevator pitch – one that is given to someone with limited knowledge but reasonable ability to comprehend materials if presented clearly.  Each contribution presented (up to 5 total) should go through the prescribed steps:

It is basically the problem – solution approach to writing an effective grant proposal – but in a summary / elevator pitch form.  It can be applied to problems addressed and published in peer reviewed journals or to virtually any other project where the outcome of the project had a large impact on the community and for which the investigator played a significant role.

One of the early concerns for the new BioSketch format was the impression that applicants will “oversell their accomplishments and that reviewers will not read them”.  The same can be said for the entire grant proposal.  Reviewers are smart people and they can and do see through these.  As indicated above, ONLY contributions that had an important impact on an important study should be included: inclusion of trivial contributions or trivial projects will backfire.

The new Biographical Sketch format is a first pass attempt by NIH to acknowledge contributions to important research that does not necessarily relate to numbers of publications.  Its purpose is to make it easier for reviewers to note such contributions and make awards to well-deserving applicants, thereby advancing the mission of NIH.

I applaud NIH for this effort.

I feel that this improvement as well as the prior change to the short grant format truly do assist researchers in their grant quests and truly do advance the mission of NIH.  Having said this, only those that know how to properly frame their Biographical Section C – Contributions to Science section will benefit from the opportunity.  I further submit that the change is particularly well-suited for the young investigator and for investigators with less than stellar publication records – by serving as a mechanism to establish a track record that reflects their contributions.

Dr. Robert Finney is founder of Innovative Research Grants, LLC (https://www.innovativeresearchgrants.com/ ).   Dr. Finney has a doctoral degree in Biology from the University of Iowa and postdoctoral training in Genetic Engineering at the University of California, San Francisco.  He is a scientist, entrepreneur, professional grant consultant, strategic planner, grant evaluator, and grant writer.  His career has spanned academic, pharmaceutical, and biotechnology industries (grant funded).  He assists both academic and industry researchers and specializes in assisting those that are struggling to attain grant funding.   Dr. Finney has attained millions of dollars in grant support for his own research and for those of other scientists and now assists Dr. Morgan Giddings with her Grant Dynamo and Grant Foundry clients.